Well my friends already blogged about how to get the Heads Set and what it's like so I won't bother writing about that. They're better bloggers than me anyway.

What I'm going to write about are my personal experiences when it comes to the greatest local band ever.

1995 - Overdrive
It started when I was in the 6th grade. My then best friend (I really don't know what happened to us) bought the Cutterpillow album and invited me to listen in his house. All I can remember now is that I literally rolled on the floor laughing during the Overdrive's epilogue. After that, I told my mother what I wanted for my birthday. Do you remember how it feels like to get something you really want? Do you remember not getting disappointed at all? That's how I felt when she handed me the cassette tape. I listened the crap out of that cassette every morning. If last.fm existed in the mid-90s, the bar beside the Eraserheads would look like the Empire State building if you put it in Makati.

1998 - Saturn Return
Three years later, in high school, when we thought we were the coolest people on earth, my best buds went on a trip to Antipolo by ourselves and brought along the whole Eheads discography up to that point (Aloha Milky Way was the latest release that time). So there we were, beside a 4 ft swimming pool, sucking at pool, drinking lemonade, blasting all 50+ Eraserheads songs. If the internet existed back then, I'd be tagging my blogpost "THE BEST THE BEST THE BEST".

2000 - Southsuperhighway
Natin99 had just come out and it was the balls. At least that's what I thought. My dad, upon hearing Southsuperhighway, went bananas and father-preached about what good music is. He says the dude ain't singing (he's shouting), and is disgracing the art of singing. To be perfectly fair, that song wasn't really supposed to attract a normal person's ears. A lot of noise and a lot of things going on in the song, so I can't blame him really. I think he pulled the living-under-his-roof card so I had to stop listening for a while.

2001 - Maskara
I saw it on MYX and I remember telling myself "wtf is this crap?" I also remember blaming Raimund for forming Sandwich and thanking him at the same time cause Butterfly Carnival was an absolute beast in my ears and apparently in the charts.

After that, for some reason, they just faded in my world. Like an hourglass, the sand just kept trickling down until I flip the whole thing... 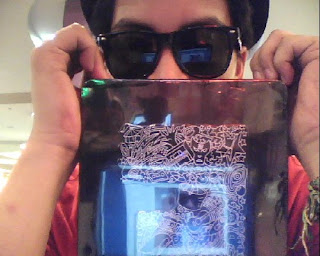 Labels: about me, eraserheads, music, sandwich